Disrupting a Sleeping Giant From His Apartment 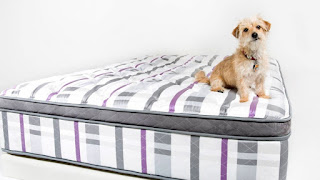 How a one-employee startup turned a traditional industry upside down.

The global mattress industry is expected to reach sales of $38 million by 2020. In the past two years, Dan Adler has disrupted this massive industry in several ways. And it all started as a one-man operation in Adler’s apartment.
Adler is the founder of WinkBeds, an ecommerce mattress company that’s grown by leaps and bounds over the past two years. He’s done it by straddling a divide that many businesses don’t even attempt to cross. WinkBeds is premised on the aesthetics of traditional craftsmanship and made-to-order, handmade goods; at the same time, the company has produced one of the most high-tech mattresses on the market.
This dual identity of craftsman and techie has enabled WinkBeds to disrupt both the traditional and ecommerce mattress industries. The company’s latest disruption tactic is embodied by the launch of the brand’s new coolControl™ base, which allows for active warming and heating of the mattress.
From a one-man show to a mattress sensation: Here’s how Adler's disruption reshaped the mattress industry.

Like most bootstrapping startups, Adler started small. Before he was an entrepreneur, he was a lawyer who wanted to do something with his life other than practice law. So he started WinkBeds in early 2015 and ran the tiny mattress company in the evenings after finishing his days at the law firm. He was able to gain traction initially by riding the coattails of Casper’s launch, which placed online mattress sales on the cultural radar.
Once he was selling a few mattresses a week, Adler quit his law job and began running the business from his apartment. For a while he was a one-man operation. He fielded customer service calls, manually input customers’ shipping info, ran the web chat, grew the brand’s presence on social media and took care of every other responsibility the business required.
In July 2015, Adler’s hard work paid off: A popular mattress review site gave WinkBeds a stellar review. That publicity was all the company needed to skyrocket from selling three mattresses per week to 300 per month. Shortly thereafter, Adler brought on his first employee.

In the time since WinkBeds was founded, the business (and the team) has steadily grown. While the size of the company has changed, one thing has remained the same: WinkBeds is a success because it continually disrupts the traditional and the online mattress industries in unique and effective ways. Here’s how WinkBeds used disruption to land on the mattress industry map.

At the time of WinkBeds’ launch, most online mattress retailers were choosing to go the bed-in-a-box route, which required that mattresses be entirely foam. But Adler recognized that the most popular mattresses in America are still innerspring.
“We saw an opportunity to sell higher-end luxury mattresses because it was an underserved market online,” says Adler. So he decided to manufacturer the best of both worlds: A hybrid mattress that contains two layers of innerspring coils and a layer of foam on top. The design distinguished WinkBeds from many of its competitors and resonated with consumers, who are increasingly willing to shell out for luxury goods.

2. Manufacture in the USA.

Traditional mattress manufacturing and sales involves a tremendous amount of overseas labor and shipping. In contrast, says Adler, “We believe in supporting American workers and the U.S. economy.” To that end, all of WinkBeds’ mattresses are handmade to order outside of Madison, WI.
Keeping manufacturing in-country also allows WinkBeds to retain higher quality control and safety standards. For example, all of the foam used in WinkBeds’ mattresses is certified toxin-free by CertiPUR. The mattresses also rely on tencel, a moisture-wicking material that’s more eco-friendly than cotton.
Maintaining strict quality and ethics standards has allowed the brand to be fully transparent with its customers. “I think people like doing business with brands they can trust,” says Adler. In fact, consumer trust has been central to WinkBeds’ success, as much of the brand’s growth is driven by word of mouth.

One of the most common sleep problems people experience is sleeping hot, says Adler. Yet the mattress industry has struggled to create effective temperature control mechanisms for mattresses. It was here that Adler saw a major opportunity.
Shortly after launching WinkBeds, Adler started working on a top-secret project. The fruits of that labor were revealed on February 1, when WinkBeds launched its patented coolControl™ base. “It’s the first time anybody has been able to figure out how to actively heat and cool the mattress down,” says Adler.
The base functions much like a boxspring; but instead of simply supporting the mattress above it, the base locks into the mattress and allows for temperature control via a conduction process and the use of fans, which pump hot or cold air directly into the mattress. Users control the temperature of both sides of the bed (separately or together) via an app that offers five warm setting and five cool settings. The warm settings can heat the mattress up to 30 degrees warmer than room temperature; the cold setting allows the mattress to be as much as 12 degrees cooler than the air in the bedroom.
These disruptions have earned WinkBeds a major role in the ecommerce mattress scene. And it’s all the result of bootstrapping. Adler has never raised investor money, so the company has never been beholden to stakeholders or arbitrary revenue numbers.
“That’s allowed us to take our time in developing high-quality products,” says Adler. “It’s been a slow build. It’s all related to great customer service and the quality of our product.”

Dan Scalco is the founder and marketing director at Digitalux, a digital-marketing agency located in Hoboken, N.J. Throughout his career, he has helped hundreds of businesses save time, increase leads and maximize sales.
Read more